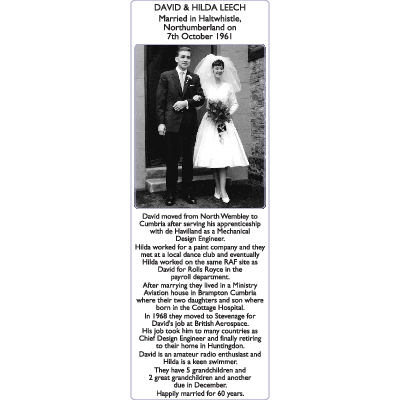 DAVID & HILDA LEECH Married in Haltwhistle, Northumberland on 7th October 1961 David moved from North Wembley to Cumbria after serving his apprenticeship with de Havilland as a Mechanical Design Engineer. Hilda worked for a paint company and they met at a local dance club and eventually Hilda worked on the same RAF site as David for Rolls Royce in the payroll department. After marrying they lived in a Ministry Aviation house in Brampton Cumbria where their two daughters and son where born in the Cottage Hospital. In 1968 they moved to Stevenage for David’s job at British Aerospace. His job took him to many countries as Chief Design Engineer and finally retiring to their home in Huntingdon. David is an amateur radio enthusiast and Hilda is a keen swimmer they have 5 grandchildren and 2.5 great grandchildren. Happily married for 60 years.